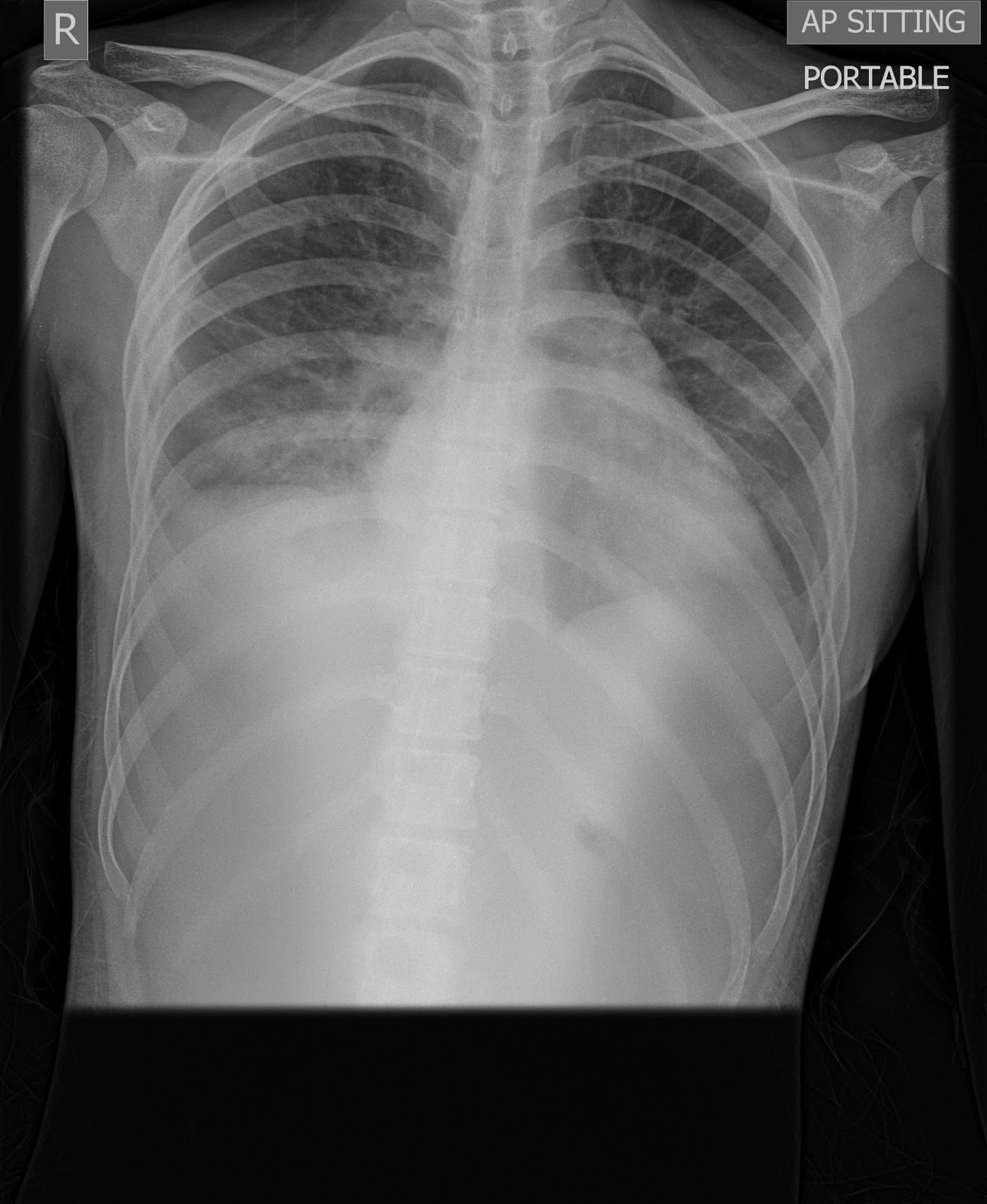 I showed a few of my residents this chest x-ray and asked for their x-ray diagnoses. Pulmonary congestion and congestive cardiac failure was the first thing to come to their minds. However, when I told them that this chest x-ray belonged to a teenager, they became less certain and started coming up with other possibilities, over-reading the x-ray. Confabulation I say.

Truth is, this teen actually had acute heart failure from myocarditis. The diagnosis was only made in the ED after several hours. Patient presented atypically (chief complaint of vomiting and tummy pain), denied any chest symptoms or dypsnoea, though palor and mild tachypnea was present at rest. Vital signs were 'arguably' normal though mild tachycardia was seen. Heart lung examination were normal at presentation. The labs did not make sense at first to the managing team, and it was only after careful analytical thinking was the diagnosis made and ultimately confirmed with bedside ultrasound.

And there lies the crux. When we are faced with a dilemma or diagnostic uncertainty, we often fall back to familiar territory. MICU consult called it sepsis with shock, HAGMA, AKI and possibly hepatic origin given raised right hemidiaphragm and abnormal liver function test. This diagnosis was particularly difficult to shake off, even though additional tests reduced the likelihood and perhaps even refuted the diagnosis (absence of fever, normal white counts, normal pro-calcitonin levels etc).

So what happened was a case study in cognitive biases (a.k.a cognitive dispositions to respond or CDRs). The ED has been called a 'natural laboratory of errors'. There is a lot going on to annoy the emergency physician in his or her work; time pressures, information overload, undifferentiated patients and constant disturbances just to name a few. Not to mention cognitive biases and those that took place in this case; triage cueing, anchoring, diagnostic momentum, confirmation bias and framing effect.

To sort through all this we need to think about how we think, otherwise known as metacognition. Knowing that the cognitive process of clinical decision making is in effect dual process theory, where most of our snap decisions occur using the intuitive and heuristic based system 1 thinking. This is quick, useful for most daily work and usually successful, but is prone to cognitive errors. Stepping back and using the more structured and analytical system 2 thinking is better at times like this, because it forces us to consider opposites, form alternative hypotheses and take into account biases.

And that's what we did. By considering cardiogenic shock instead of septic shock. Pieces of the puzzle started to fall in place and that led to our conclusive bedside ultrasound. An enlarged heart with global hypokinesis and extremely poor ejection fraction was what we found. The patient was right sited and received the correct therapy and support.

Scott Weingart and his famous blog emcrit.org showcased literature for the resuscitationist in a recent episode. I would suggest all to read it and the related articles. In it you will find a mention to Pat Croskerry, a Professor of Emergency Medicine practicing in Nova Scotia, Canada. His awesome writings about cognitive processes, diagnostic errors and clinical decision making is what inspired this post. Happy reading !
Posted by Ang Shiang-Hu on January 09, 2013
Email ThisBlogThis!Share to TwitterShare to FacebookShare to Pinterest
Labels: critical care, philosphy