Anchoring and its impact on clinical decision making

Anchoring is a cognitive bias, arising from reliance on the first piece of info, whether true or not, when making decisions. This occurs on a regular basis, during clinical practice and most times it goes unnoticed.

Case Illustration: True Story
A middle aged Indian gentleman has had about 6-7 prior attendances to our ED over the last 4 years and has been diagnosed with ‘gastritis’.  He had an OGD done in 2011 but defaulted follow up OGD. He has now presented to the ED 3 days in a row, each time with severe epigastric pain (pain score 10) radiating to the back. On the first two occasions, he was treated symptomatically as for ‘gastritis’ and discharged with meds & appt when symptoms improved. Now he presents for the 3rd time, in obvious pain and distress. FBC was done on the first 2 occasions showing mildly raised white counts, LFT and lipase were also repeated both normal. Does he now have severe ‘gastritis’?

Looking back over the past 4 years, he had been having episodic presentations of epigastric pain and remained well in-between. The usual presentation seemed acute (a specific time was often documented), pain occasionally radiated to the back and it usually resolved after some antacids or PPI or analgesia. Endoscopy in 2011 reported ‘mild corpus gastritis’ (that’s endoscopy speak for “hey I see a bit of redness better call it something than have a normal report”).

So, no more blood tests for Mr Painful. He gets a ED bedside ultrasound. Lo and behold, clear as day to the beginner sonographer, one sees multiple gall stones, thickened gallbladder walls and pericholecystic fluid (see attached picture). He gets proper analgesia, antibiotics and an admission to appropriate unit. 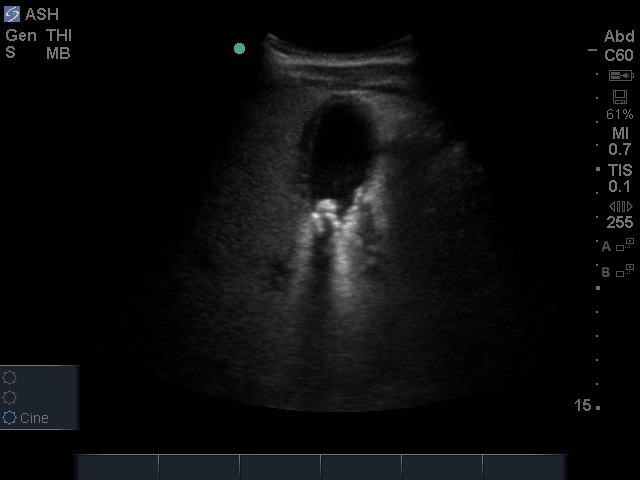 In hindsight Mr Painful got 4 years of misdiagnosis, lots of suffering, an unnecessary endoscopy (lucky he skipped on the repeat) and a final climatic admission. Isn’t biliary colic a more likely consideration given the presentation? Knowing the natural history it always resolves after some time and whatever meds. Leave ‘gastritis’ to the endoscopists; it should be a diagnosis or exclusion for us ED folk. Examples of other common misdiagnosis of gastritis (true cases) had been: acute aortic dissection, appendicitis, inferior AMI.

How to avoid anchoring?
It’s tough. Studies have shown that even when told to avoid anchoring and that a given fact may be falsehood, study groups have consistently shown higher rates of making decisions based on the anchor. One way is to be like Gregory House and have a narcissistic personality (don’t trust anyone, don’t believe anything).  Unfortunately that’s hard to pull off and you don’t have a Lisa Cuddy as your CMB to develop a love relationship with. Therefore, always think differently; have differential diagnosis at hand and don’t be afraid to challenge what is established or held in common belief.
Posted by Ang Shiang-Hu on January 06, 2013
Email ThisBlogThis!Share to TwitterShare to FacebookShare to Pinterest
Labels: imaging, philosphy