When a lot fails, then what?


Here's a difficult case that one of our EM residents, Dr Corinne Lau,  encountered. What would you do?
73 y/o
PMhx:  DM , HTN , HL
Presented to the ED for palpitations , non vertiginous giddiness and chest discomfort. \
ECG: 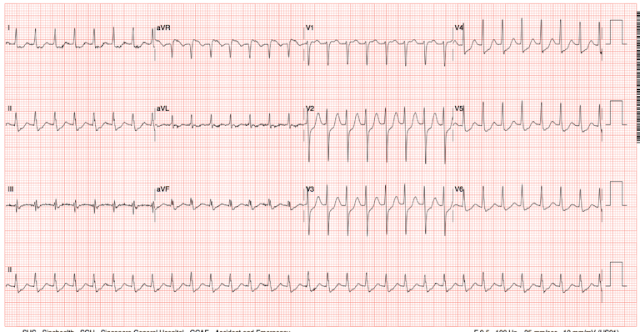 With failure of adenosine , decision  was made for synchronised cardioversion with sedation.
50J –>100J–>100J , each time the patient reverted back to SVT within a few seconds and remained hypotensive.
Repeat  BP 70/50  despite IV fluids . HR ranged between 180-200.
Cardiology on call was consulted:

Q1 :How to correct the hypotension? Is noradrenaline or dobutamine an option ?
Ans :
Management of hypotension always starts with fluid resuscitation. Rate control agents are all vasodilatory and therefore some fluid resuscitation would be helpful.
If decision is made to start vasopressors . Aim is to maintain good blood pressure but not counteract the rate controlling drugs. i.e. amiodarone.
Noradrenaline can be used as a temporising measure , as it has vasoconstriction with limited impact on heart rate (chronotropy) .Dobutamine is a potent ionotrope with weak chronotropy but it significantly increases myocardial oxygen consumption ,
BOTTOMLINE : Fluids remains the first line of treatment ,and if decision is made to start vasopressors noradrenaline is the drug of choice for most physicians.

Q2 What is the drug of choice when adenosine and electrical cardioversion fails and patient remains hypotensive?
Ans :
Amiodarone is considered first line in this case , as it is believed to have less hypotensive effects compared to calcium channel blockers (CCB). Also CCB should be used in caution in those with unknown EF.
If amiodarone fails, CCB can be tried  and diltiazem is preferred to verapamil .
Use diltiazem , not as a push but a slow bolus . Drip it in at 2.5 mg/minute until HR < 100 or you get to 50 mg. Diltiazem can be converted to a conventional dose when patient is more stable.
Reference of local evidence of slow infusion CCB in termination of SVT :http://www.resuscitationjournal.com/article/S0300-9572(01)00459-2/ppt
Posted by Rahul Goswami on January 17, 2017
Email ThisBlogThis!Share to TwitterShare to FacebookShare to Pinterest
Labels: cardio, critical care, ecg, residency